To determine your software version, go to your 20|20's Setup page and look for Version the top of the screen

Find and understand all metrics widgets available on the 20|20

Metrics widgets give you a quick look into how your systems are performing. This article will let you know which metrics come in widget form and what those widgets mean.

As a general rule, if you tap on a metrics widget, you’ll be taken to a row-by-row overview page for that metric, like the one pictured below. Some widgets behave a bit differently, though, and when that’s the case, it will be noted below.

Remember that widgets are often available in multiple sizes. The images in this article only represent the largest available widget, since they often contain the most information. But you should always check out other size options if your preferred layout needs a different size or shape.

Additionally, you will only be able to add widgets for systems that you have already added in the Equipment setup menu. If you don’t see a widget listed on this page in your 20|20, it’s because you need to add it there

Anatomy of an Extra-Large Metrics Widget

Extra Large widgets contain the most information, and they usually look pretty similar. So by familiarizing ourselves with them, we can get a pretty good understanding of how widgets organize and display metrics information.

The first thing to notice about any widget, no matter its size, is its color. As elsewhere in the 20|20, this color reflects the health of the system: Green is good. Yellow is starting to become a problem. And red is a problem that needs to be addressed. You can adjust the thresholds for these colors on a metric-by-metric basis by going to the relevant system in the Crops setup menu.

When you’re applying at different rates in multiple sections, though, you may see parts 1 and 2 replaced with a pair of numbers, representing the two rate sections.

If you are planting with two rate sections, they will show up separately in the widget, as shown here, and the rainbow chart will disappear.

The Average Spacing metric tells you how far apart seeds in the trench are, on average. It is calculated by dividing a number of seeds planted by the distance traveled while planting them.

It is not an indication of spacing accuracy. For that, you should look at the SRI widget. 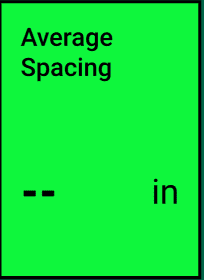 The Good Ride metric tells you how smoothly your implement is traveling over the soil. More specifically, it tells you the percent of time when the ride is smooth enough not to interfere with seed spacing.

You should review this in tandem with the SRI widget. If the SRI is high (not good) and the Good Ride is low, then you should consider slowing down to improve both metrics and get more even seed spacing. 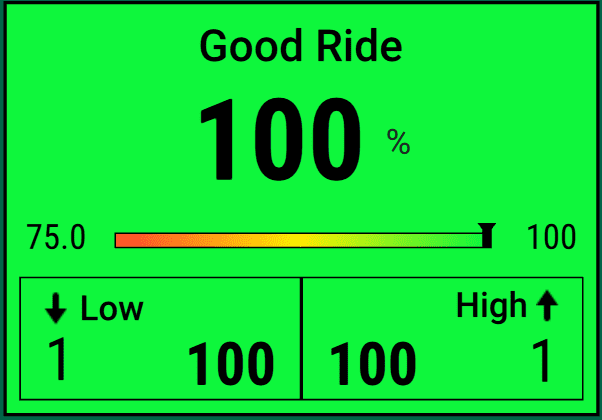 The Population widget tells you how much seed you’re planting per acre. That’s not a running total, though. It’s an extrapolation from your current seeding pace. Essentially, the 20|20 looks in each row to see how much seed you’re planting per square inch, averages that across all rows, and then tells you how many seeds you’d end up planting in an acre if you kept planting at exactly that pace. 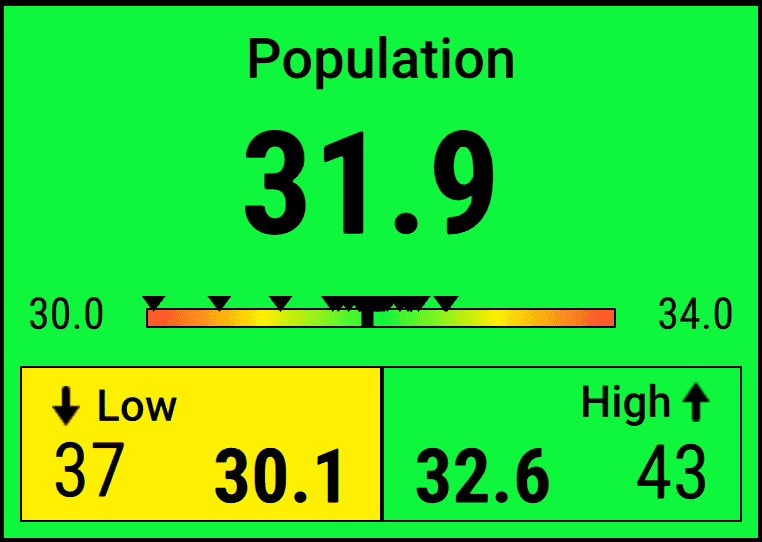 The Singulation widget lets you know how your meter is performing. It tells you what percentage of seeds are being properly singulated, i.e., planted one by one without missing a beat. So, for example, a singulation rate of 99.5% means that the meter is planting 0.5% of seeds as either multiples (more than one seed in a single spot) or skips (no seed where there should be).

When your seeding rate is above 45 seeds per second, the Singulation widget will always display a value of --

See the Skips & Mults widget for the flip side of this one. 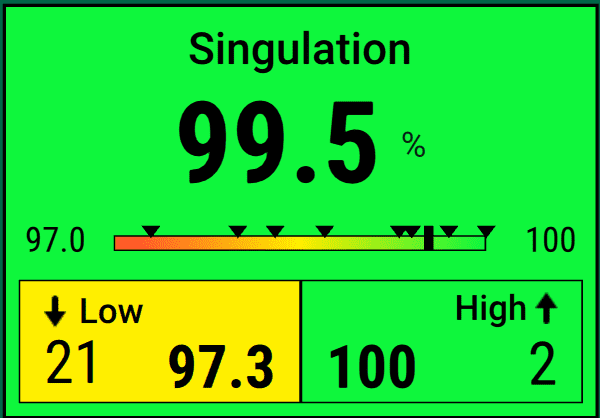 This widget is the flip side of the Singulation widget. Instead of focusing on the success rate, it breaks down the failures into two categories:

Both values are given as percentages of the total planted seeds. Lower values are naturally better. 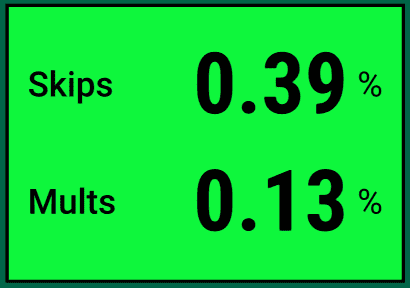 The SRI widget shows your current Seed Release Index, which is a measure of how evenly spaced your planted seeds are, ignoring skips and multiples. Lower values are better, since they mean more consistent spacing.

Theoretically, a 0% SRI would be perfect — every seed is exactly where it should be relative to its neighbors. At the other extreme, if your SRI gets above 32%, that means that your seeds are so erratically spaced that their placement can effectively be considered random.

By default, this widget will turn yellow when the SRI gets above 20%, which is where SRI starts to have negative agronomic implications. But you can adjust that threshold, as with all metrics alerts, in the Crops setup menu. 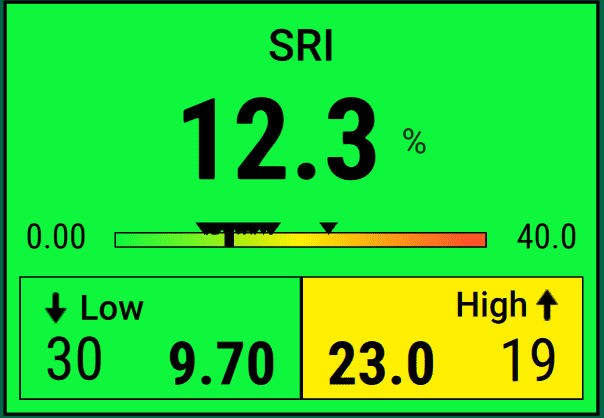 The Vacuum widget displays the readings from vacuum sensors connected to SRMs. In keeping with the 20|20’s three-part implement model (think of the three section switches on the Cab Control Module), the widget display values for the Left, Middle, and Right sections. 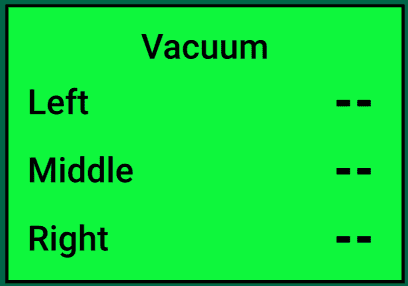 The Down Force highlights the key metrics of how your Down Force system is performing: 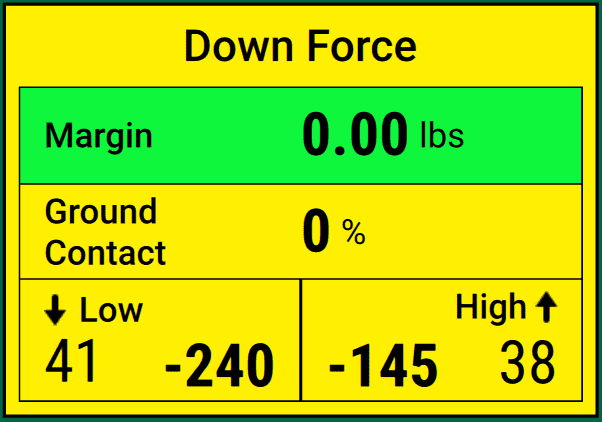 This is really a family of widgets, each representing one of the liquid or granular systems you have on your implement.

The names of these widgets will depend on the “product” nicknames you chose to represent your systems when they were added in the Equipment setup menu.

In general, they simply tell you the rate at which that system is applying product. 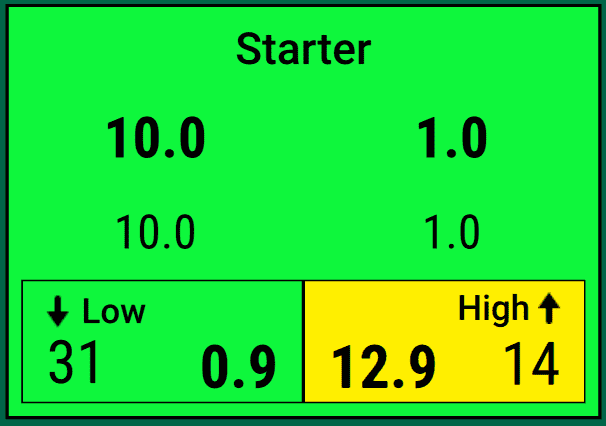 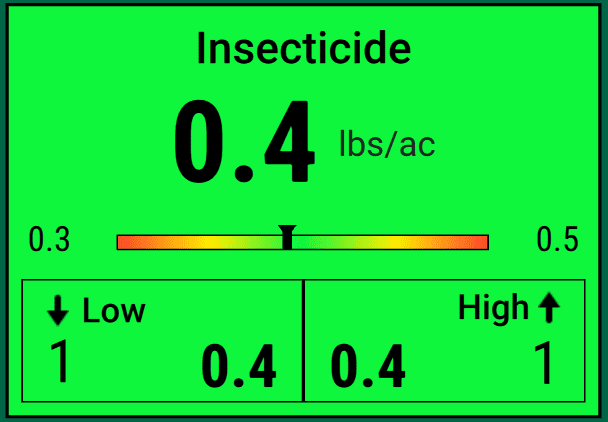 This widget tells you the pressure differential between the inlet and outlet of the filter on the liquid system it belongs to.

As with other liquid system widgets, this will have a different name depending on how you set the system up.

This widget tells you the pressure that the system is applying liquid at.

As with other liquid system widgets, this will have a different name depending on how you set the system up. 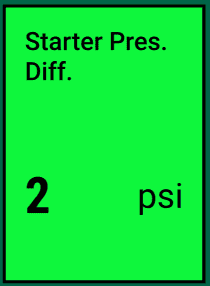 This is actually a pair of two widgets, both of which are based on your Tank Mix settings. They let you know how much liquid you have remaining in your tank, either in terms of volume or in terms of how much acreage that volume can cover.

As with other liquid system widgets, these have different names depending on how you set each system up. 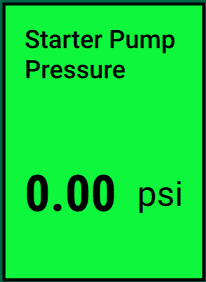 The Clean Furrow widget tells you what percentage of your furrow is “clean” — i.e., free of crop residue — according to SmartFirmer data.

Higher is better, and you should try to stay above 95%. 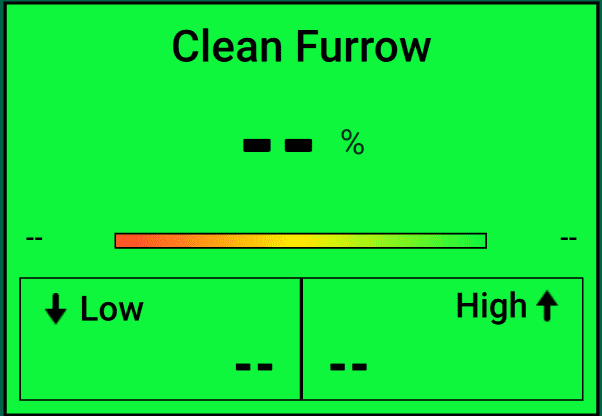 This button displays the three day seed weight percentage of the moisture of the furrow as measured by SmartFirmer. Range is from 0 – 60% with a goal of 20% or higher. 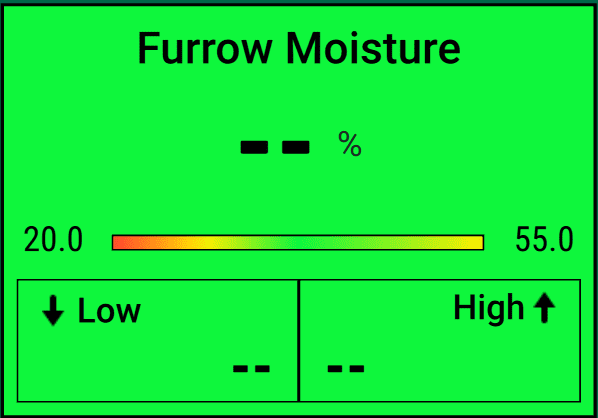 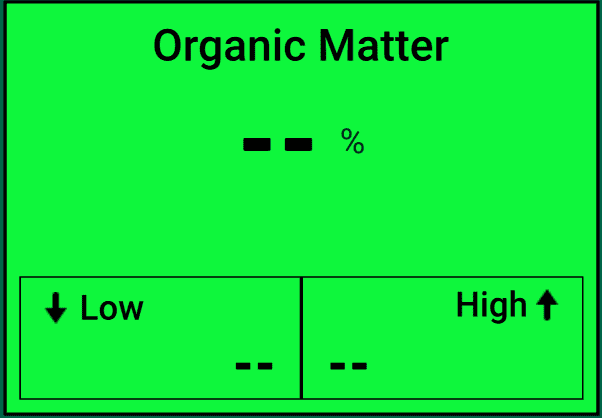 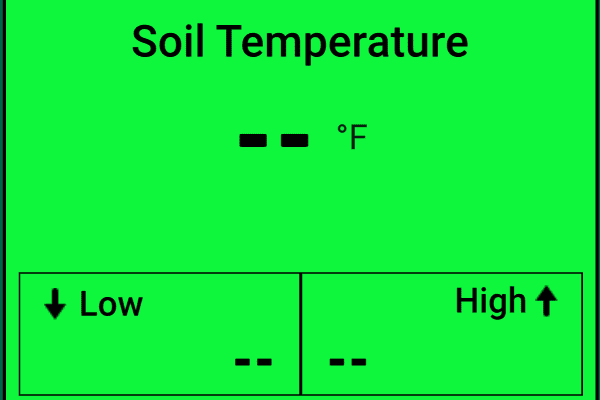 The Uniform Furrow widget tells you what percentage of your furrow is “uniform” — i.e., consistent in terms of light, cloddiness, moisture changes, etc. — according to SmartFirmer data.

Higher is better, and you should try to stay above 95%. 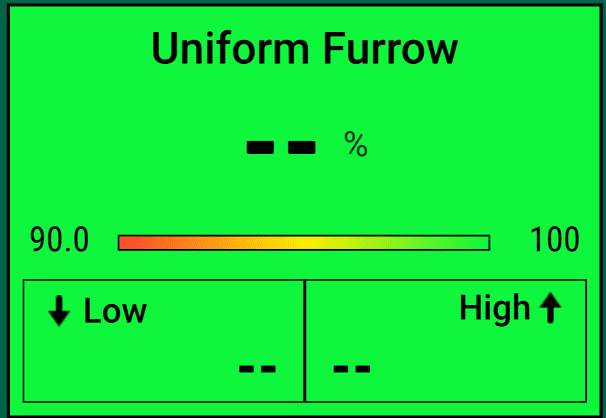 The Depth widget shows how deep your seeds are being planted, on average. 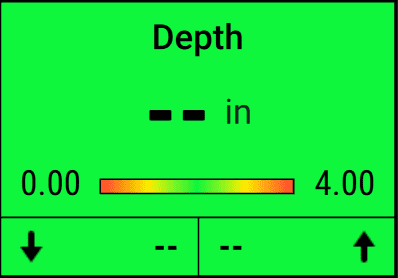 The Closing widget highlights the key metrics of how your Closing system is performing: 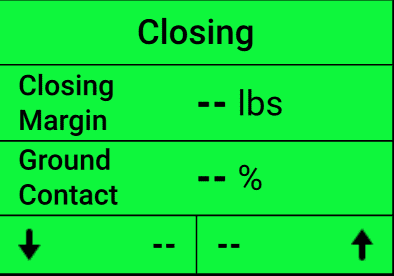 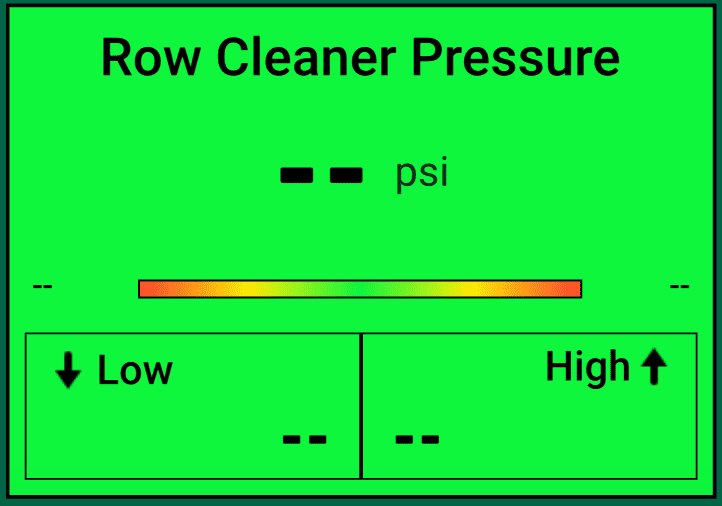 The Acres widget tells you how much land you have covered, using three counters: A and B are manually resettable, a bit like car odometers, while F gives your coverage so far in the currently active field.

Tap on the widget any time to go to the Counter Details page, where you can reset the A and B counters whenever you like.

In smaller versions, individualized A, B, and Field Acre counter widgets are available as well. 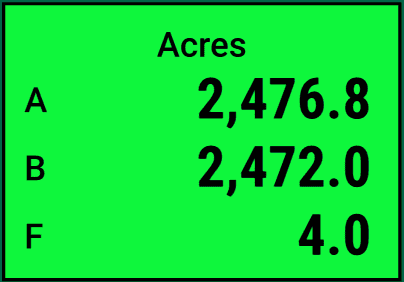 The Acres per Hour widget shows how many acres you can cover in the next hour, given your current speed. 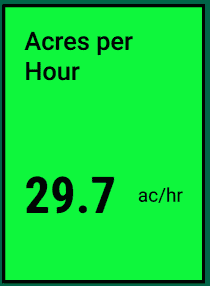 The DBM Stats metric gives you some basic facts about your Display Base Module: 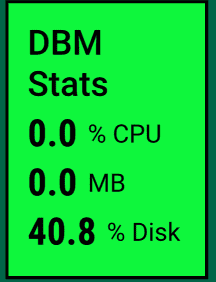 The Diagnose widget gives you a quick overview of your implement health. It is color-coded according to the most serious diagnose status among your systems.

Tapping it will take you directly to the Diagnose menu so that you can address any issues. 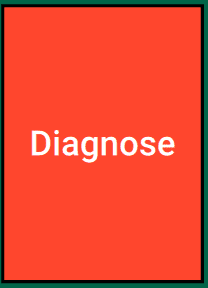 The Gyro metric tells you about the turn your implement is making, specifically its radius in degrees per second. This measurement is used for turn compensation to ensure that outer and inner rows keep applying the expected amount of product even when they are moving at different speeds. 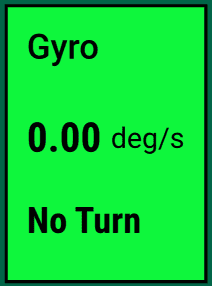